Extensive post production to support a range of programmes and features for Sport Relief.

This was the first time Sport Relief had been broadcast from dock10 in Manchester and they required fast turnaround post production for the many pre-recorded elements that supported the six-hour live show.

In the weeks before the broadcast hundreds of hours of rushes were sourced from across the UK and ingested straight into dock10’s Avid ISIS/Interplay network so that they were immediately available in all the edit suites. To provide the speed and flexibility needed for a fast turnaround, five Avid Media Composer suites worked from an Avid ISIS/Interplay network. Finishing was done using a combination of Avid Symphony online suites and dock10’s Baselight grading suite. All the audio was mixed using ProTools V12.

To get people excite for the big night an hour-long special Paddy McGuinness' Sport Relief Warm-Up was made. This involved two weeks of craft edit running alongside the VT edits, with the 60-minute show going through a Baselight grade, Avid Symphony online and ProTools dub before file delivery straight into the live transmission.

On the night of Sport Relief, over 30 VTs were fed directly to dock10’s studios for the six-hour live show. As this was being broadcast, it was captured and onlined in an Avid Symphony suite to make the highlights show overnight.

The whole process was overseen by dock10’s creative team: the Online Editor was Robert Douglas-Reeves, the Dubbing Mixer was Mike Stewart, the Colourist was Jamie Parry and the Post Producer was Kate Cronin. 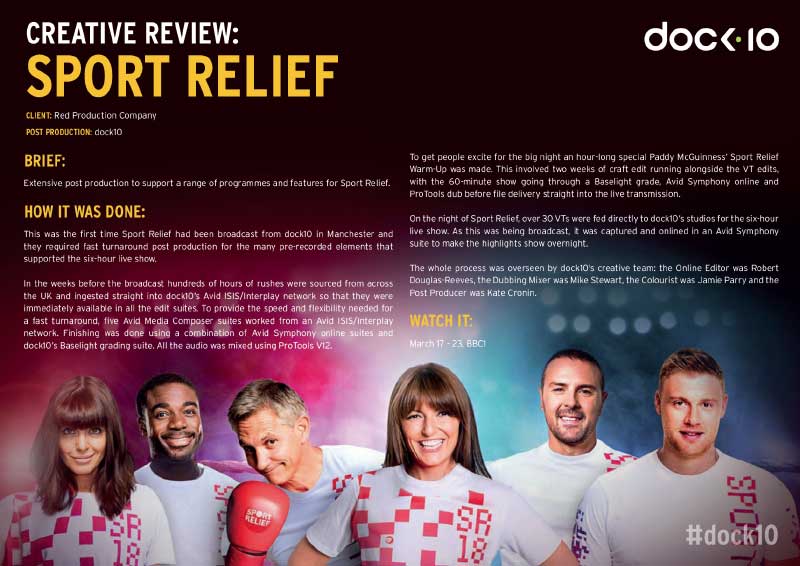